According to an article today on BBC News, Facebook is planning a Facelift. According to BBC the new design will completely change the look of Facebook. Instead of your profile being all one page (with all those annoying applications), your Facebook profile will now be seperated into tabs at the top.

The tabs will include your Feed, Wall Posts, Information, Photos, Applications, and then there is a + button at the end which is reason to believe you could add even more tabs (This is not confirmed just a speculation).

The change to the look of Facebook is being done in hopes to declutter the profile page. After the introduction of applications members profiles became cluttered and well just plain annoying.

BBC reports that unlike past changes, this time Facebook actually asked the public.

Wait hold on a second... I never saw anything about facebook changing. I never saw this so called group, or any announcement about it on Facebook.

Could this be the next Facebook Failure?
For more on this story go to BBC 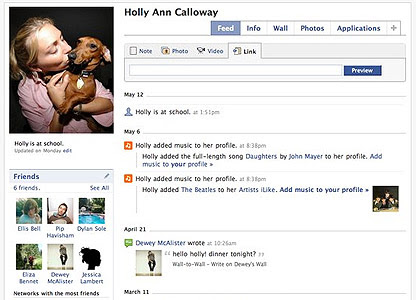