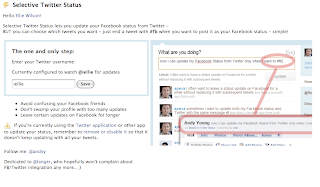 This post is kind of a rant Sorry I just had some things to say. I do talk about the new application Selective Twitter That I have started using to update my facebook status through twitter so I don't flood out my friends front pages.

Social Networking sites like Facebook, Myspace, Twitter, etc. have become apart of our daily lives, at least for most people. I am on most social networking site and some of them I have been a member on since near the beginning. Lately, they are driving me insane!

Recently I have been unable to use Twitter from my phone and after some digging I found out it could be my phone provider and not Twitter. I'm still not entirely sure but I'm working on trying to get it fixed since I can neither Tweet or receive tweets. Other people have also been having this problem form the same provider I use as well as other providers.

Another Twitter issue I have recently come to face is the fact I've hit my Follow limit! If you follow me and I don't follow you back this is probably why. I don't follow every single person that follows me but if your updates are interesting and you don't seem to just be following hundreds of people to spam or what not I normally follow back. Obviously I won't be able to do anything until I can up my follow limit or go through and unfollow some people. :(

I see what Facebook was trying to do but in the end it had kind of failed. I've had the problem where someone will send some thing out to several people and my entire front page is filled with their updates! I have also cut out my twitter feed and I am now using an application called Selective Twitter Status. It is easy to use and instead of sending all of your tweets to facebook it will only send those that have #fb in the tweet. It's great and cuts down on the flood effect. I know some people have asked well how is that different from Ping.fm I don't use ping.fm because I found it works ok for some people but not all. I think for the majority of people Selective Twitter will work better.

iEllie said…
See there are some tweets I don't want to go to my facebook that I just want on Twitter that aren't @ replies. So thats why Selective Twitter works so well for me.
March 26, 2009 at 4:04 PM