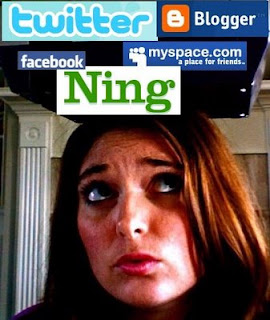 Are all these social Networks causing you to break down and want to give up? Having problems keeping up with the latest "Hap" on the Internet?

Here is the secret: You don't have to join every social network on the Internet! (Did I just hear a sigh of relief?)


With the Internet you are always going to be behind when it comes to the next big thing. Sure you could hire someone, but most likely with the state of the economy, that is out of the question. You could always hire an Intern, but even the youth today aren't always as tech savvy as you think.

I don't think I could even name all the social networking sites available on the web. I don't know anyone that could (besides maybe Google but that isn't a person). Many of the Social Networking sites have tried to make it easier for you to post your content through applications, which is great, but risky in the security department. Your information is just bouncing around. Then there are the sites that let you update your status but not much else. This doesn't help either.

So what do you do?
-Pick, one, or two, or heck even three of these sites that really work for you.
-If you have to, split up who updates what. Most sites allow multiple admins to login and update information. Take advantage of it!!
-Keep it simple short and sweet. Already this post is to long in my book but, I had a lot to say.
-Say enough to update your audience and don't bore them or go over board.
-Use paragraphs, Bullets, Media (pictures, videos, etc.) to get your point across.

The main sites I recommend anyone trying out are:
http://www.ning.com (Create your own social Network)
http://www.twitter.com (send and recieve updates via sms, IM, and more)
http://www.facebook.com (Social Networking site that is popular easy to use and "Classier than Myspace according to some)
http://www.myspace.com (Has the most people out of any other social network but has many security issues.)
http://www.blogger.com (A great way to create a quick and easy blog that allows you to have multiple admins to update it. That is what I use for my site)

Remember don't just throw your computer out the window and give up. Take the time and re-group. Things move fast now a days. Try and keep up but don't ever give up.

Anonymous said…
I usually tell people that it's okay to flirt with as many services as you want to in order to find what you like.
July 7, 2008 at 10:38 AM

iEllie said…
Agreed Rob but in the end what you need to do is pic 3 or so and Use them. If your doing a lil here and a lil there you are not consistent. You want to keep your audience up to date and its hard to do that if you don't really narrow it down. That is what I have noticed already in the business world. Especially with layoffs happening and job positions disappearing.
July 7, 2008 at 10:42 AM

Tom Degan said…
Very cool blog! I came across it quite by accident when I goggled my nephew Chris Pennings band, Thieves and Villains. They've got a new CD out which I heard for the first time this morning - very good.

Now if you'll excuse me, I have an appointment to have my Chia Pet put to sleep....