We FINALLY made it to Disney World! 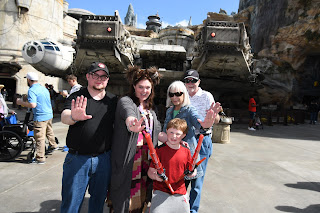 Did we have fun? Yes!

What was great? Logan had a great time! His favorite park is Epcot, and his favorite rides are Soarin, Smugglers Run, Space Mountain, and Star Tours. He had a magical time, and that’s all that matters. He LOVED Galaxy’s Edge and had a blast making his lightsabers and Droid!

But if you want an honest review of Disney without rose-colored glasses, keep reading.

We all agree that the firework show at Magic Kingdom was ok, but Harmonious at Epcot was extraordinary!

The Cast Members (staff) were wonderful! Everyone was accommodating and friendly. It was pretty crazy all week, but everyone we interacted with was kind. We only had one bad interaction with a Cast Member on Smugglers Run in the Chess Room. We did not get a picture at the chess table because of it. I was pretty bummed about that.

You still can't do much interacting with characters, but the little we did get was fun.

Were the rides still fun as an adult? Yep! We had a blast!!

I went to Animal Kingdom for the first time. I did enjoy it, but we skipped Pandora. I don't care about Avatar 🤷‍♀️ The Festival of the Lion King was fantastic! It’s a must-do! We didn’t get to do the Safari because of the weather. I hope to go back and do it the next time I visit.

Was it a madhouse? Yes!

Would I go again anytime soon if I had the choice? Nope!

We originally planned to go to Disney in June of 2020. That did not happen due to the pandemic. When Disney reopened, they promised to honor our tickets at the cost we had originally purchased them for until August of 2021. Unfortunately, Logan was not eligible to receive the vaccine yet, so we had to wait until March of 2022 at the earliest.

While we began replanning our vacation, the rules were constantly changing, and the price continued to go up. The cost of our trip probably doubled if not tripled since our original plans.

When I started replanning our trip, things like ParkPasses and Lightning Lanes were now something to plan for. This was not in my original cost plans. We paid for the park hopper option initially with the plans to hop if the park we started at was too busy. Disney changed the rule on park hopping to only after 2 pm since I had purchased the tickets. We ended up only using it one day, and if I had the option when I rebooked, I would have asked for a refund on the park hopper and put it towards Lightning Lanes.

When we originally planned to go to Disney, it was before the 50th Celebration. I was excited to be there for fun, but we did feel that extra cost.  Another thing that was frustrating was the crowds. Disney is still in the process of restaffing, and it was highly noticeable on Monday at Magic Kingdom. The lines for everything were insane. And I do mean everything! The park was completely overloaded, and there was zero crowd control. It was our worst day.

Even with the Lightning Lane days we did purchase; it was tough to plan our days. We did Lightning Lanes Sunday at Hollywood Studio and Monday at Magic Kingdom. Unfortunately, because it was so crowded, it didn’t work the way it was intended. There weren’t enough windows, and we could only book Lightning Lanes for the late afternoon, even though I was booking at 7 a.m. We had two at Hollywood Studios on Sunday and three at Magic Kingdom on Monday. It was pretty messy. When we came back to Magic Kingdom on Saturday, the flow was better, and the crowds weren’t as bad, so you could actually wait in a line in between or do a “filler” ride or activity. That was not the case for Sunday or Monday. We didn’t have a prayer with Rise of the Resistance. I wasn’t about to stand in a 3-hour line with an eight-year-old.

PhotoPass was inconsistent. We had an incredible photoshoot in Galaxy’s Edge at the Millennium Falcon on Sunday. For the rest of the trip, the photos were good but not excellent. The photo pass did not work well on rides at all. We are still missing photos from some rides.

We thought we would be able to refill our water bottles and save some money on water. We didn’t see one water refill station. That was another unexpected cost.

The Orlando Airport is a nightmare. Baggage claim and the car rental when we arrived were absolute chaos. Trying to check-in for our flight home was also chaos.

Disney just updated their signage around the property, and the placement and direction are horrible. Don't trust the signs. Use Waze.

Overall we did have a great time. In some ways, it was better than we originally had planned, and in others, not so much.

Side note, my phone screen got cracked on the trip. I’m taking it to the Apple Store tomorrow to get it repaired.