Bun in the Oven 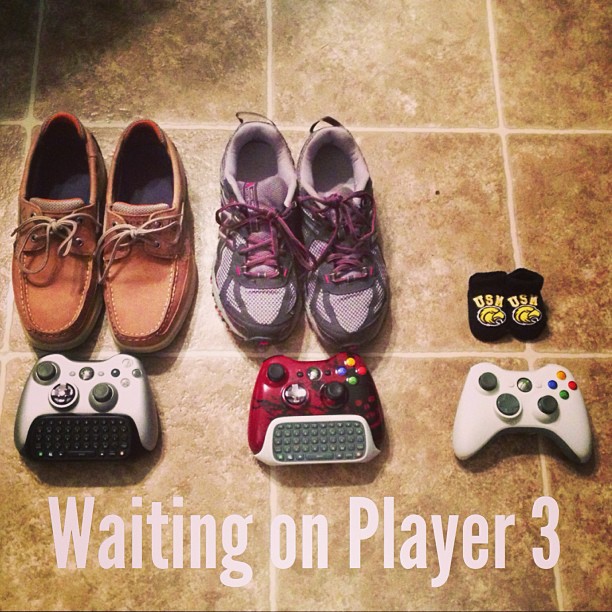 If you haven't heard the news, we are expecting! My due date is February 27, 2014. We are very excited. I will be 13 weeks pregnant tomorrow.

So far it's been quite a wild ride. I found out I was 5 weeks pregnant at my annual on June 20. I had a feeling I was pregnant when I went in to my appointment. Of course, I told Grant that I was pretty sure I was pregnant and told him I would probably find out at my annual. He said I could not tell him until I got home. My appointment was in the morning. IT WAS THE LONGEST DAY OF MY LIFE!!! I finally got off work and called Grant. I told him that I wouldn't know for 3 days.

On my way home I stopped at Walmart and picked up a few goodies for him. 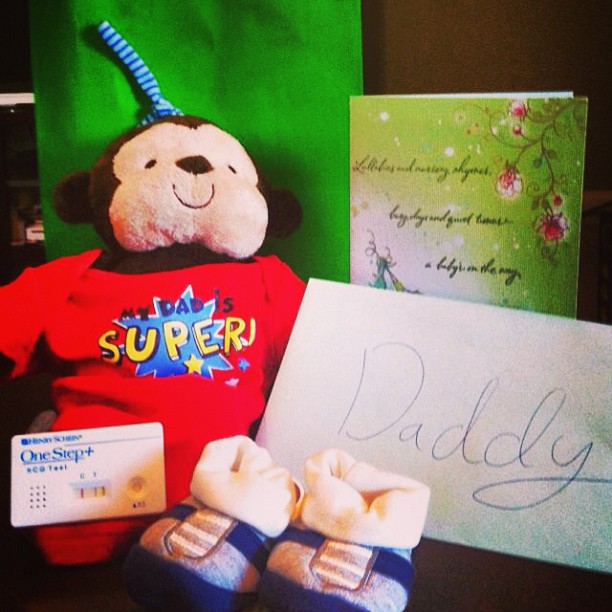 I picked out a monkey that played a lullaby when you pull it's tail, baby shoes and a onsie that said "My Dad is Super." I bought a card and a bag and put the test in the bag. When I got home I pulled the tail on the Monkey while walking in the door. Grant was very excited! 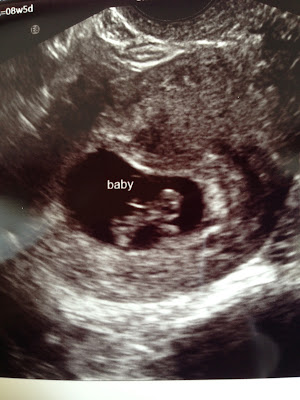 For the first few weeks I didn't have any morning sickness. As time went on though I started having weird pregnancy symptoms. The worst was my 7th week I got sick with a stomach virus (the doctor determined it was a stomach virus because of my symptoms which I will not go into detail about).

At my 8 week appointment I had my first sonogram. The baby looked more like a peanut than a baby, but the doctor said all was well and healthy.

Around this time I started having this crazy drainage. I had no idea this was a pregnancy symptom! It's a kind of drainage that is very thick and sticky. It makes it hard to eat or drink anything and tends to make you sick to your stomach. 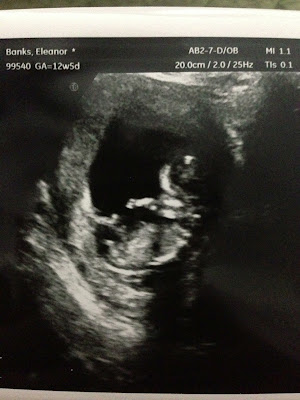 This week we had a pretty bad scare. Early Tuesday morning around 12:30 I woke up very suddenly. I was bleeding. This can be common if it is just a little spotting. Unfortunately, I was not spotting, I was bleeding. I called the doctor and they said if it continued or got worse to go to the ER. By 3 a.m. it had definitely gotten worse. I decided it was time to go to the ER. Grant and I piled into the car and drove to the hospital. They ran blood tests and did a sonogram. The result? Nothing out of the ordinary. They baby's heart beat was great and everything else seemed fine.

Luckily, I had my appointment with my doctor Tuesday morning at 8. We left the ER, grabbed some breakfast and went back for the appointment. The doctors office did another sonogram with their equipment. Again, they didn't find anything out of the ordinary and the baby looked great. Actually, the baby looked like a baby this time! It is amazing how much it grew in just a months time. I had a bit of sugar for breakfast so the tech had a bit of trouble getting a picture. The baby was flipping and swimming around. It was so cool to see that!

They aren't sure what caused the bleeding but did say that it was not something that was normal but could have been a fluke.

I've been told to take it easy for the next few weeks and that is exactly what I am going to do. Hopefully we won't have anymore visits to the ER.

We are so excited about this baby. We can't wait to bring a new life into this world. Thank you, everyone for your kind words!